Why are the Easter bunny and eggs associated with Easter?

Easter is one of the most important festivals and holidays in the Christian calendar.  Although for many people the 4 day holiday is often not truly celebrated for its Christian roots, the tradition of giving chocolate Easter eggs is one that most households participate in.  My children look forward to the Easter bunny coming and littering the yard and the house with Easter eggs which they are then challenged to find.  I have always wondered though what the significance of the Easter bunny and chocolate eggs are in the scheme of the death and resurrection of Christ. 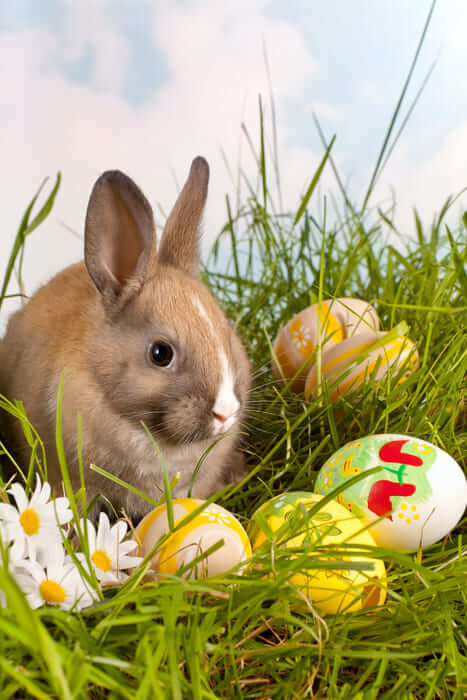 Easter in the northern hemisphere is in the spring time, and the ancient Saxons held a pagan festival at the same time as our Easter every year.  This festival was to commemorate the goddess of spring and new life Oestre.  It is eventually believed that this name was eventually translated to Easter.

History.com suggests that “rabbits, known to be prolific procreators, are an ancient symbol of fertility and new life. According to some sources, the Easter bunny first arrived in America in the 1700s with German immigrants who settled in Pennsylvania and transported their tradition of an egg-laying hare called “Osterhase” or “Oschter Haws.” Their children made nests in which this creature could lay its coloured eggs. Eventually, the custom spread across the U.S. and the fabled rabbit’s Easter morning deliveries expanded to include chocolate and other types of candy and gifts, while decorated baskets replaced nests.”  Like many Christian traditions Easter eggs too owe their beginnings to pagan traditions, “The egg, an ancient symbol of new life, has been associated with pagan festivals celebrating spring. From a Christian perspective, Easter eggs are said to represent Jesus’ emergence from the tomb and resurrection. Decorating eggs for Easter is a tradition that dates back to at least the 13th century, according to some sources. One explanation for this custom is that eggs were formerly a forbidden food during the Lenten season, so people would paint and decorate them to mark the end of the period of penance and fasting, then eat them on Easter as a celebration.”